On Stage Behind the scenes 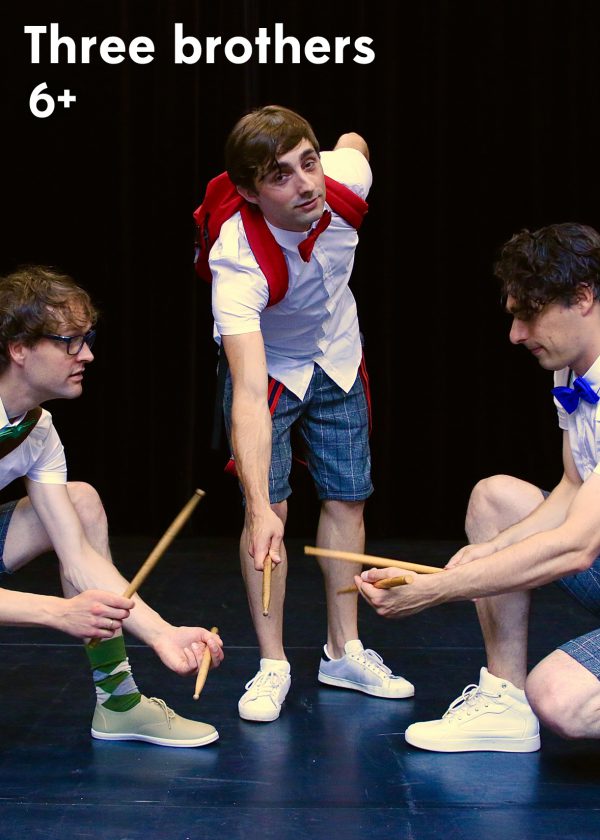 Do you also sometimes have a hard time going to bed, because you can’t stop playing? This is especially difficult when you have two brothers to play with!

In the production Three brothers six hands, thirty fingers, three doors and a lot of other objects play the leading part. Instead of going to bed as their mother wants them to, the brothers play and create rhythms with everything in their rooms. They beat, roll, swipe, sweep and brush. Who is the fastest, the smartest? Who dares to be quiet the longest? Meanwhile doors are making music, cymbals fly around and sticks are singing.

Three Brothers is based on the Oorkaan-production Trommelvuur that premiered in September 2009. The tour of Three Brothers in China (summer 2016) is organized by Hermark Culture.

““Anyone who watches the faces of the children in the audience at the final piece, when cymbals are used like spinning tops, knows for sure that Trommelvuur is a successful experience.””
Slagwerkkrant, October 2009

This website uses cookies to improve your experience while you navigate through the website. Out of these, the cookies that are categorized as necessary are stored on your browser as they are essential for the working of basic functionalities of the website. We also use third-party cookies that help us analyze and understand how you use this website. These cookies will be stored in your browser only with your consent. You also have the option to opt-out of these cookies. But opting out of some of these cookies may affect your browsing experience.
Necessary Always Enabled

Performance cookies are used to understand and analyze the key performance indexes of the website which helps in delivering a better user experience for the visitors.

Analytical cookies are used to understand how visitors interact with the website. These cookies help provide information on metrics the number of visitors, bounce rate, traffic source, etc.

Other uncategorized cookies are those that are being analyzed and have not been classified into a category as yet.